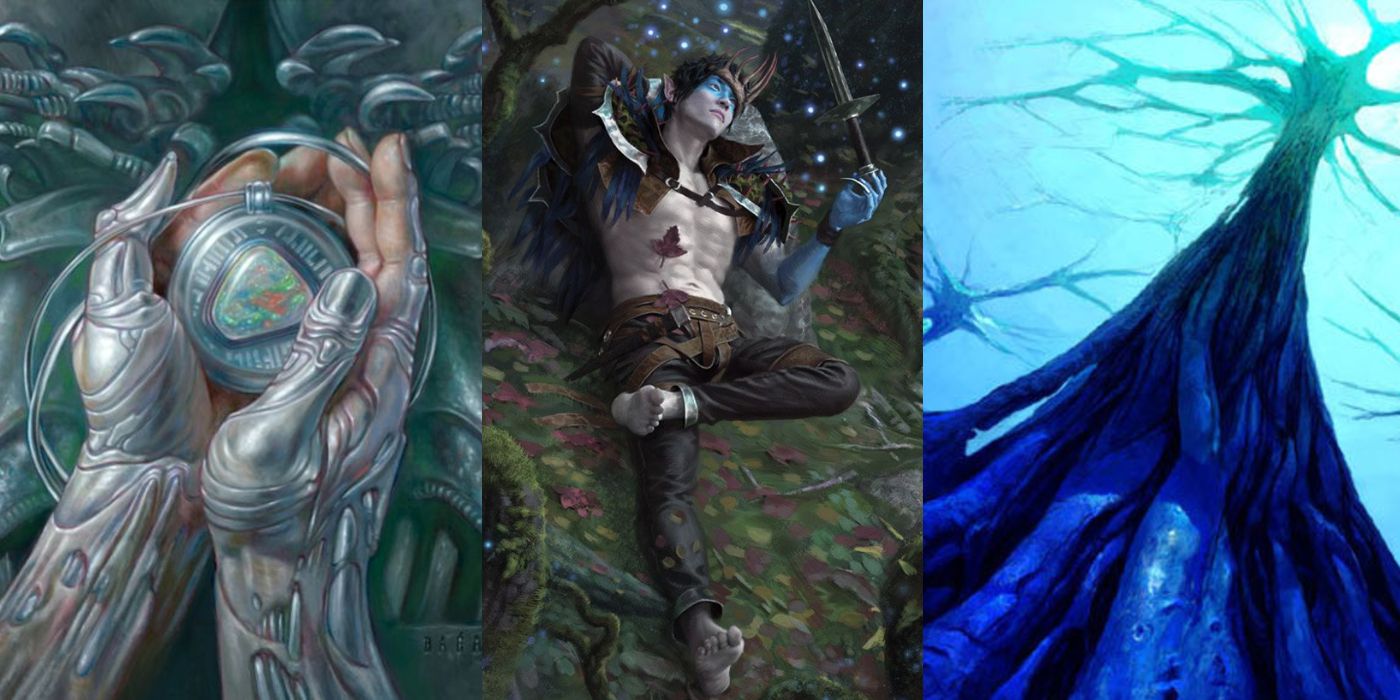 Wizards of the Coast announced today that the Magic: The Gathering Modern format will ban Oko, Thief of Crowns, Mox Opal, and Mycosynth Lattice from competitive play following a period of time for the first two cards that reached historical levels of dominance for both pillars of the popular Urza, Lord High Artificer deck. The Modern format has been in a state of flux for a lot of 2019 as Wizards of the Coast unleashed Modern Horizons on the format, the first set release designed explicitly for Modern. Sales of the set performed well, but many of the cards contained within it fundamentally changed the landscape of a format that had previously adapted and evolved much more slowly.

Hogaak was the first strategy to emerge from the Modern Horizons release to become too powerful for competitive play, and the deck required two sets of bannings to address it. Izzet Phoenix, a deck that contained Aria of Flame from Modern Horizons, also saw Faithless Looting out of the Magic: The Gathering Modern format. War of the Spark released a handful of new planeswalkers into Modern that have also created additional pressure on the format, and one of them, Karn the Great Creator, was fundamentally responsible for Mycosynth Lattice even seeing play at all. For many players, 2019 is best summarized by the release of Oko, Thief of Crowns, a card that Screen Rant previewed during the Throne of Eldraine spoiler season. The card was simply too powerful in virtually every format it could be played in and, following a Standard and Pioneer ban for the planeswalker, many knew its time was coming in Modern as well.

However, Magic: The Gathering Modern bans have extended beyond Oko this time around, as Wizards of the Coast announced that the format would be losing Mox Opal and Mycosynth Lattice as well. Oko’s ban was well-deserved: the card was clocking in at around 40% of deck configurations, an absurd number for a single card in a format that’s supposed to be as diverse as Modern. Mox Opal was banned to help further reduce the effectiveness of the Urza decks, which had been using both Oko and Opal to great effect for months now. Most interesting, perhaps, was the Mycosynth Lattice ban, which addressed a card because of its “unfun” play pattern and not because it was oppressive to the Modern format as a whole.

Unfortunately for fans of Magic: The Gathering Modern, it seems pretty obvious that the most recent round of bannings has failed to address a major player in the format that was already performing well during the Urza deck’s reign at the top: Primeval Titan strategies. Nothing has been lost for those decks, and their recent surge in play seems set to continue now that one of the card’s most powerful competitors has been significantly neutered. With Theros: Beyond Death on the horizon, however, there’s a chance an influx of new and powerful cards from Standard’s most recent set could help balance things without needing to address the Titan-sized elephant in the room.

For now, though, the most recent round of Magic: The Gathering Modern bans has left the community reeling from another huge shake-up. While Oko’s departure was a necessary one, it’s still shocking to see three cards that have been ubiquitous in Modern – in Opal’s case, for the format’s entirety – all leave at the same time.